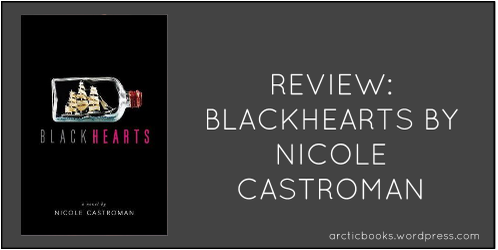 Blackbeard the pirate was known for striking fear in the hearts of the bravest of sailors. But once he was just a young man who dreamed of leaving his rigid life behind to chase adventure in faraway lands. Nothing could stop him—until he met the one girl who would change everything.

Edward “Teach” Drummond, son of one of Bristol’s richest merchants, has just returned from a year-long journey on the high seas to find his life in shambles. Betrothed to a girl he doesn’t love and sick of the high society he was born into, Teach dreams only of returning to the vast ocean he’d begun to call home. There’s just one problem: convincing his father to let him leave and never come back.

Following her parents’ deaths, Anne Barrett is left penniless and soon to be homeless. Though she’s barely worked a day in her life, Anne is forced to take a job as a maid in the home of Master Drummond. Lonely days stretch into weeks, and Anne longs for escape. How will she ever realize her dream of sailing to Curaçao—where her mother was born—when she’s stuck in England?

From the moment Teach and Anne meet, they set the world ablaze. Drawn to each other, they’re trapped by society and their own circumstances. Faced with an impossible choice, they must decide to chase their dreams and go, or follow their hearts and stay.

Thank you to Simon Pulse for providing me with a copy of this book in exchange for an honest review.

BLACKHEARTS was a wonderfully-written, bittersweet read that I absolutely adored. This book follows the origin story of Blackbeard, the captain of Queen Anne’s Revenge, before he became a pirate, or as Nicole Castroman calls it: pre-pirate.

BLACKHEARTS is written in two points of view: that of Teach (Blackbeard) and Anne. Both characters long to explore the world and to leave the situation they currently are in; Teach has come back home to England from a year at sea and would love nothing more to continue to do so, but he’s engaged to a baron’s daughter and doesn’t want to disappoint his father, Master Drummond. Similarly, Anne, the illegitimate daughter of a wealthy merchant and a slave, is employed in the Drummonds’ household and longs to leave England to find her mother’s family.

There was another little aspect of the novel I loved: Teach calls Anne his queen, and as you might know, Blackbeard’s ship was named Queen Anne’s Revenge. I realized this connection while I was reading this novel, and by the end, I was so emotional—the ending was so painful and emotionally-wrecking because I wasn’t sure what was going to happen to Teach and Anne (I really hope there’s going to be another book).

Overall, it’s a fantastic origin story—BLACKHEARTS is definitely a novel to pick up when it releases!

Have you read this book? If so, what were your thoughts? If not, are you planning to read to? Let me know in the comments!