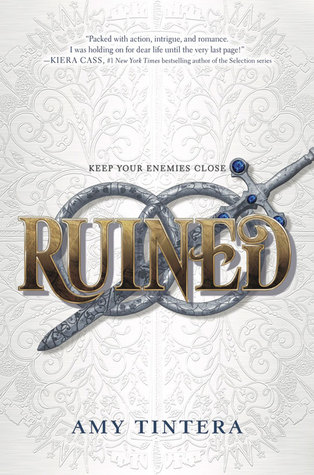 Emelina Flores has nothing. Her home in Ruina has been ravaged by war. She lacks the powers of her fellow Ruined. Worst of all, she witnessed her parents’ brutal murders and watched helplessly as her sister, Olivia, was kidnapped.

But because Em has nothing, she has nothing to lose. Driven by a blind desire for revenge, Em sets off on a dangerous journey to the enemy kingdom of Lera. Somewhere within Lera’s borders, Em hopes to find Olivia. But in order to find her, Em must infiltrate the royal family.

In a brilliant, elaborate plan of deception and murder, Em marries Prince Casimir, next in line to take Lera’s throne. If anyone in Lera discovers Em is not Casimir’s true betrothed, Em will be executed on the spot. But it’s the only way to salvage Em’s kingdom and what is left of her family.

Em is determined to succeed, but the closer she gets to the prince, the more she questions her mission. Em’s rage-filled heart begins to soften. But with her life—and her family—on the line, love could be Em’s deadliest mistake.

Thank you to HarperTeen for providing me with this book in exchange for an honest review.

I’ve been looking for a really solid, well-developed fantasy for a while, so when I heard about RUINED, I was really interested. The synopsis sounded intriguing, and I really adore the cover. Fortunately, I was impressed with this novel and its creative approach to some popular tropes.

The concept of this novel drew me in immediately. Em, a Ruined, must marry the prince, Cas, in order to bring down his kingdom and bring freedom to the persecuted Ruined people. Although I know some people say that this book had a plot similar to many other YA novels, I had never read anything like it, but I’m currently totally digging this sort of concept. Of course, Em and Cas fall in love, but what stands out about this book is that Tintera takes some common tropes and morphs them into something completely unique and thrilling.

The characters were also multi-dimensional and so, so interesting to read about. You have Em, who is mentally and physically tough and well-trained, but she has so many layers to her and it was incredibly engrossing to read about her and how her decisions and thought processes start to change. And there’s also Cas, who is the sheltered, oblivious prince at first, but as the novel goes on, you can see how much he’s grown and learned to see things differently. Moreover, I’ve read so many fantasy novels in which women are still treated lower than men, but this book contains leaders who are female and has that overall sense of social equality (minus the persecution of Ruined people but).

The romance was probably one of my favorite aspects of this novel. Can you say slow-burn? If you’re a fan of slow-burning, emotional connections, this one is the one for you! Em and Cas initially avoid each other, but throughout the novel, they slowly get closer and it’s amazing to see how their relationship evolves over time.

Overall, I highly recommend this book! It was incredibly enthralling and Tintera does an amazing job of creating this new fantasy world, filled with action, pretty awesome fight scenes, political intrigue, and slow-burning romance. This book ended on a slight cliffhanger and there’s a hint of a developing antagonist (who is bound to cause Em to make tough decisions in the next books), but I can’t wait to pick it up!