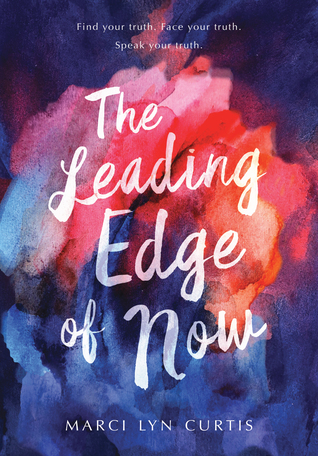 Just when Grace is beginning to get used to being an orphan, her estranged uncle suddenly comes forward to claim her. That might have been okay if he’d spoken to her even once since her father died. Or if moving in with Uncle Rusty didn’t mean returning to New Harbor.

Grace once spent the best summers of her life in New Harbor. Now the place just reminds her of all she’s lost: her best friend, her boyfriend and any memory of the night that changed her forever.

People say the truth will set you free, but Grace isn’t sure about that. Once she starts looking for it, the truth about that night is hard to find — and what happens when her healing hurts the people she cares about the most?

Something you probably should know: I got kicked out of my first foster home.

All right, so that’s a smidge theatric. It isn’t as though I was acting up or cussing or doing drugs, or anything. My foster parents didn’t toss me to the curb, my suitcase flying out behind me. And the truth of the matter is that I actually liked Heather and Thomas Danielson, my first foster parents, who were perfectly nice and kind and friendly.

Who I did not like was their twelve-year-old son, Phillip.

Now, I’m just going to come on out and say it: there’s nobody meaner than a twelve-year-old boy. In fact, I’m reasonably certain that somewhere in a psychology journal, there’s a chapter revealing a scientific study that quite explicitly states that twelve-year-old boys are — and I might be paraphrasing here — spawns of the devil. They have an uncanny ability to find the one thing you’re sensitive about — the one thing you’re aware is your very worst feature — and then tease you about it mercilessly.

This is a trademark move. It’s virtually unavoidable, because what they are saying is true. And how can you argue with the truth? In my case, I’d probably lived with the Danielsons for a day, tops, when Phillip started in on my largish nose.

Can you smell what’s for dinner tomorrow?

Does that thing influence the tides?

Stop breathing up all the air in the room.

Here we are, just the three of us.

And so on and so forth. He was relentless. Keep in mind that I’d just lost my dad. My mind was a tangle of what had happened with Owen the last time I was in New Harbor. I was living in a house with virtual strangers. I felt like a tree that had been uprooted and then stuffed back into the ground in a foreign country, where everyone spoke a different language and ate weird foods. I won’t go into details, but eventually Phillip just wore on me until I snapped.

I lasted a whopping three weeks.

After that, I lived with the Marios, where I rode out the rest of my time. The Marios lived smack in the middle of Tampa in a five-story condo development, of which Mr. Mario was the super. So I dubbed him “Super Mario,” which is probably the laziest nickname ever.

The Marios were sympathetic and soft-spoken and keen on giving me whatever I needed. Thing is, I wanted something they couldn’t give. I longed for the life I used to have. I wanted this one memory of sitting on the couch in Rusty’s living room. On my lap was a plate of pizza, which I ate while Rusty and Dad, on either side of me, watched a baseball game, lulled by the sounds of the game and the garlicky smell of pizza sauce and the weight of the thick sea air. After a few minutes, Rusty became bored with the game and took a giant bite of my pizza. Sorry, he said, though he was smiling. I jabbed him with my elbow, pretending to be annoyed. Dad laughed and stretched an arm over the top of the couch, squeezing my shoulder. It is such a normal memory — totally ordinary, actually — but even so, we were more a family then than ever.

Now, years later, as I sit on that same worn plaid couch, I realize that I know exactly what I want, because, once upon a time, it was mine.

Marci Lyn Curtis is the author of young adult dramedies THE ONE THING and THE LEADING EDGE OF NOW. She lives near Tampa, Florida with her husband. You can find out more about Marci on her website (marcilyncurtis.com), on Twitter (@Marci_Curtis), on Instagram (@marcilyncurtis), or on Facebook (marcilyncurtis).

3 winners will win a finished copy of THE LEADING EDGE OF NOW, US Only.