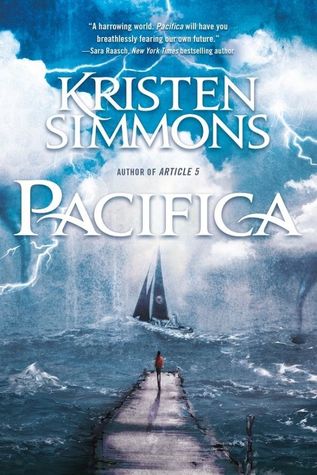 Marin is cosario royalty, a pirate like her father and his father before him. Sailing the ocean to chase adventure is in her blood. But these days no one cares that the island town her people call home is named after her grandfather. They have a new leader, one who promises an end to their hunger – and one who thinks that girls are meant for the kitchen or the brothel. Marin knows she’s meant for more than that, and with the sudden influx of weapons on the island, and rumors of a pending deal with the enemy oil nation in her wake, she knows a big score to gain the council’s favor is the only way to save her people, and herself.

Ross lives a life of privilege. As the president’s son he wants for nothing, but he longs for a life of adventure. On a dare, he convinces his best friend Adam to sneak out to the Docks, the site of local race riots between the poor Shorlings and the upper class. But when Adam is arrested along with the other Shorlings, and not even the president is willing to find him, Ross finds himself taking matters into his own hands. He journeys back into the Docks, ready to make deals with anyone, even a beautiful pirate, if it means Adam’s safe return.

When Marin and Ross meet in dangerous Shoreling territory he sees a way to get his friend back and she sees her ticket home. The ransom a president’s son would command could feed her people for years and restore her family’s legacy. But somewhere in the middle of the ocean, Marin must decide if her heart can handle handing over the only person who has ever seen her as more than a pirate.

Once again, Kristen Simmons creates a vivid post-apocalyptic world view, this time focusing on climate change and the effect it has on the future. PACIFICA is filled with action-packed scenes, a tender romance, and a harrowing and intriguing setting.

PACIFICA follows Marin, a cosario (think pirate), and Ross, the son of the President in this futuristic government. As their paths cross, they figure out the truth about Pacifica, the tropical island to which five hundred citizens are to be sent. I immensely enjoyed the discussion of climate change, especially the timeline that depicted the effects of climate change and the disintegration of the world as we know it.

Told in alternating perspectives of Marin and Ross, PACIFICA was incredibly unique and creative. The characters were lovely to read about, if a little dense (such as Ross and his unbelievable stupidity). The only reservation that I have is that the unfolding of the Pacifica scandal was a bit difficult and confusing to interpret when I read it.

Overall, PACIFICA is a solid futuristic standalone that probes deeply into the effects and dangers of climate change. If you enjoy adventure, post-apocalyptic settings, and a kick-ass heroine like Marin, be sure to check this book out!

Thank you to Tor for sending me a copy of this book in exchange for an honest review.

One thought on “Review: Pacifica by Kristen Simmons”