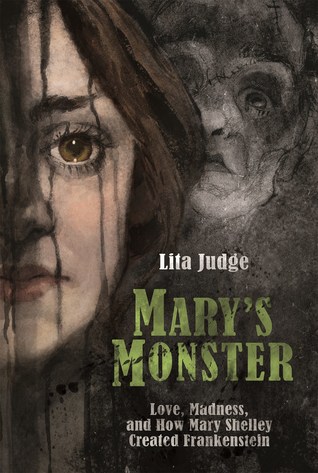 A young adult biography of Frankenstein’s profound young author, Mary Shelley, coinciding with the 200th anniversary of its publication, told through free verse and 300+ full-bleed illustrations.

Mary Shelley first began penning Frankenstein as part of a dare to write a ghost story, but the seeds of that story were planted long before that night. Mary, just nineteen years old at the time, had been living on her own for three years and had already lost a baby days after birth. She was deeply in love with famed poet Percy Bysshe Shelley, a mad man who both enthralled and terrified her, and her relationship with him was rife with scandal and ridicule. But rather than let it crush her, Mary fueled her grief, pain, and passion into a book that the world has still not forgotten 200 years later.

Dark, intense, and beautiful, this free-verse novel with over 300 pages of gorgeous black-and-white watercolor illustrations is a unique and unforgettable depiction of one of the greatest authors of all time.

Huge thanks to my friends from Roaring Brook Press / Fierce Reads for sending a review copy of this title in exchange for an honest review. This did not, in any way, affect my overall opinion of the book and/or the story.

During the first two weeks of January, I felt this utter need to read something creepy that’s not too much hard to get into. And I was surprised to see that that was exactly what was waiting for me within the pages of Mary’s Monster. And so I read it in a day, all the while enjoying the beautifully drawn artwork and incredibly emotional poetry that gave a lot more context into the most terrifying novel known to all generations. Read on for a detailed review of Mary’s Monster: Love, Madness, and How Mary Shelley Created Frankenstein.

Mary’s Monster is a graphic novel that is told in prose / poetry, and even though I’m not that familiar with the horror genre, I really did enjoy breezing through this title. I had quite an enlightening time knowing the pains and hardships that Mary Shelley went through that made her want to create Frankenstein. Also, the  poetry that the author came up with were all very heartfelt, and I, as a reader, felt the main character’s pain in one way or another. I might not have connected with Mary the same way as I hoped, but I respect her story, and I hope that other readers will too.

The artwork that were drawn to help tell the story of Mary Shelley were also very creepy, and it certainly served it’s purpose for me. The reason as to why I really breezed through this book is that the artwork really did make me uncomfortable given the nature of the story. I didn’t want to linger on too much because I mostly read this during the night, and I was afraid that I might not be able to sleep properly afterwards. (Go ahead and call me a crybaby now. *laughs*) And with that said, I think it’s safe to say that the illustrations most certainly did it’s job quite well.

“I might not have enjoyed this as much as I wanted to, since I’m not the biggest fan of the genre, but I did appreciate the book in it’s entirety. The artwork in Mary’s Monster were all drawn creepily, perfectly depicting the horror found within the story. It made me feel quite uncomfortable, but I suppose that was the whole idea of it. My heart broke for Mary, and so this drove me to finish reading the story. It’s definitely terrifying, and yet so very intriguing in it’s own way. For those who are looking for quick, emotional, but frightening reads, this might just be the book for you.”

Do you read creepy graphic novels for yourself? If so, then what’s a title that you’d like to recommend? Also, this isn’t a question but you should definitely check out Mary’s Monster!