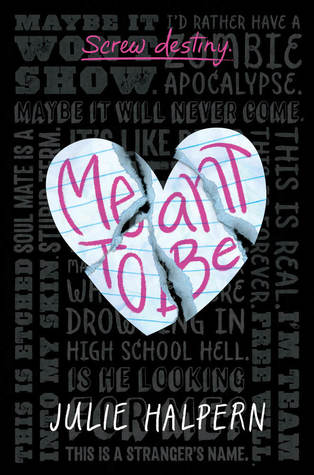 In a world where the names of MTBs—”meant to be” mates—appear on the body at age eighteen, a girl must decide whether to believe the phenomenon or follow her heart in this YA novel.

It started happening a few years ago: the names of MTBs—”meant to be” mates—appeared emblazoned on the skin at age eighteen. Agatha’s best friend has embraced the phenomenon and is head over heels in love with her MTB. But Ag isn’t so sure. As she searches the interwebs for her MTB (who has a common name, no less) she finds herself falling for a co-worker at the local amusement park. Is he a better match? What does Agatha really want in a mate, and moreover, what does she want for herself?

With her trademark wit and irreverence, acclaimed author Julie Halpern explores an age-old question: Who are we meant to be with? Readers won’t be able to resist knowing the answer.

Huge thanks to my friends from Macmillan International / Fierce Reads for sending me a review copy of this book in exchange for an honest review. This did not, in any way, affect my overall opinion of the book and/or the story.

Destiny and Fate are two terms that I always associate with romance and the contemporary genre. Call me a hopeless romantic, why don’t you? There’s something about the idea that just makes me weak in the knees, just thinking about the endless possibilities that 2 characters could somehow end up together. And Julie Halpern’s Meant to Be screams just that. Read on for the rest of my review.

Aggy, our female lead, is one of the funniest female main characters I have ever read about. Her unfiltered mouth and unparalleled humor hands down makes her stand out and it also makes her such a fun and spontaneous narrator, which is always a great thing for readers, myself included. I very much enjoyed her way of telling her entertainingly vivid story. I know she’s just a fictional character, but I found her tone and voice so engrossing sometimes that I mostly forgot that she’s only a figment of the author’s imagination and creativity. I love her bubbly and charming personality, and this happens to be one of the reasons why I enjoyed this novel.

As for the downside, though, I found the first half of the story a little too flat and for me, the story lacks a little foundation. I was greatly entertained with the author’s writing style, and the narrator’s voice, yes, but I firmly believe that there could have been better and stronger ways to introduce the story. I mean, I’m not a writer, and I know nothing about what the author intended for readers to feel while reading the first few chapters of the book, but I only felt connected to Agatha and the other characters until after reading halfway. I wanted so badly to like the opening scenes because I love the concept of the story, but it just fell a little short in my opinion.

Let’s keep the roller coaster tone of this review: Another thing that I loved was Agatha’s character development. At first, Aggy was this agitated teen who wanted nothing more than to abolish the concept MTBs. She loathed the idea of being robbed of her freewill and choices when it came to finding her love interest, and this made her the ideal female lead, at least in my opinion. And I think it suffice to say that 300 pages worth of Julie’s creativity was enough to turn her into an open-minded young woman who is as spontaneous as she is versatile and flexible. I adored this change, and if it weren’t for this vital aspect, I think I might not have liked this as much as I did.

“Meant to Be is a novel about a young woman defying the rules imposed upon her to prove the importance of choices and freewill. It’s a novel that’s filled with humor, thanks to a main character who is as funny as she is smart. I might not have loved it as much as I wanted, but I did like the story as a whole and I would still recommend it for lovers of the contemporary genre, especially for those who like the idea of fate, destiny, and serendipity.”

4 thoughts on “Review: Meant to Be by Julie Halpern”