Hi all! Today I’m a part of the blog tour for THE LAST MAGICIAN by Lisa Maxwell! I currently have a digital ARC of this new release, and I’m so excited to dive in.Here’s a bit more about the book!

Stop the Magician.
Steal the book.
Save the future.

In modern day New York, magic is all but extinct. The remaining few who have an affinity for magic—the Mageus—live in the shadows, hiding who they are. Any Mageus who enters Manhattan becomes trapped by the Brink, a dark energy barrier that confines them to the island. Crossing it means losing their power—and often their lives.

Esta is a talented thief, and she’s been raised to steal magical artifacts from the sinister Order that created the Brink. With her innate ability to manipulate time, Esta can pilfer from the past, collecting these artifacts before the Order even realizes she’s there. And all of Esta’s training has been for one final job: traveling back to 1902 to steal an ancient book containing the secrets of the Order—and the Brink—before the Magician can destroy it and doom the Mageus to a hopeless future.

But Old New York is a dangerous world ruled by ruthless gangs and secret societies, a world where the very air crackles with magic. Nothing is as it seems, including the Magician himself. And for Esta to save her future, she may have to betray everyone in the past.

Today, Lisa is going to share 10 fun facts about Harte Darrigan in THE LAST MAGICIAN.

I loved all of these fun facts! Thank you, Lisa, for stopping by! 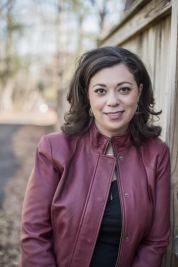 Lisa Maxwell is the author of The Last Magician, Unhooked, Sweet Unrest, and The Gathering Deep. She grew up in Akron, Ohio, and has a PhD in English. She’s worked as a teacher, scholar, editor, writer, and bookseller (at Little Professor Book Center in Alabama). When she’s not writing books, she’s a professor at a local college. She now lives near Washington, DC, with her husband and two sons. You can follow her on Twitter @LisaMaxwellYA or learn more about her upcoming books at Lisa-Maxwell.com.

Lisa has been kind enough to provide a swag pack for one winner on this site! Fill out the Rafflecopter below, and I’ll choose a winner who will receive their prize from Lisa! This giveaway will end August 20.  🙂

Lisa is also providing a signed copy of THE LAST MAGICIAN with a bonus swag pack that includes a few extra things to one winner. Fill out the Rafflecopter below to enter!

What are your thoughts? Are you planning to read this book? Let me know in the comments below!