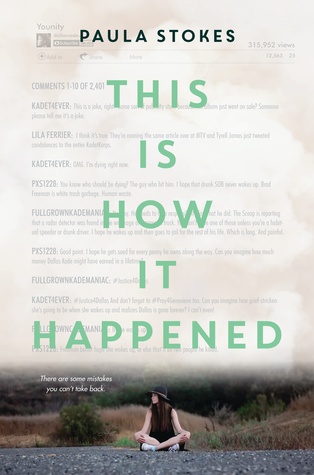 This is How it Happened by Paula Stokes
Series: n/a
Genre: YA Contemporary
Publication: July 11th 2017 by HarperTeen
Length: 384 pages
Format: ARC (thank you, Paula! ❤ )
Goodreads

Somehow I’ve become a liar. A coward. Here’s how it happened.

When Genevieve Grace wakes up from a coma, she can’t remember the car crash that injured her and killed her boyfriend Dallas, a YouTube star who had just released his first album. Genevieve knows she was there, and that there was another driver, a man named Brad Freeman, who everyone assumes is guilty. But as she slowly pieces together the night of the accident, Genevieve is hit with a sickening sense of dread—that maybe she had something to do with what happened.

As the internet rages against Brad Freeman, condemning him in a brutal trial by social media, Genevieve escapes to her father’s house, where she can hide from reporters and spend the summer volunteering in beautiful Zion National Park. But she quickly realizes that she can’t run away from the accident, or the terrible aftermath of it all.

Incredibly thought-provoking and beautifully told, Paula Stokes’s story will compel readers to examine the consequences of making mistakes in a world where the internet is always watching…and judging.

I was excited to read THIS IS HOW IT HAPPENED because Paula’s books are always something I enjoy. I thought this book was going to be somewhat of a thriller/mystery based upon the death of Dallas, Genevieve’s boyfriend, but it was so much more than that.

THIS IS HOW IT HAPPENED follows the aftermath of a car accident involving Genevieve, Dallas, and Brad Freeman, the other driver who is viciously attacked and violently bullied online. It’s undeniable that this book spreads a very important and unavoidable message about online shaming and cyberbullying. Although I felt like the plot was more focused on Genevieve’s escape from her hometown to find solace in her father and stepmother’s town, I did find that the aftermath of the car crash still haunted Genevieve.

I wasn’t a huge fan of the romance (what????? Alice, not enjoying romance???), but hear me out. While I understand why Genevieve found comfort in another boy after the death of Dallas, I still feel like I would have liked Genevieve if she had taken more time focusing on the issues at hand—Freeman’s suicide attempt and her underlying guilt. But that’s just me! Everyone grieves differently, and I understand Genevieve’s choices.

Overall, I found THIS IS HOW IT HAPPENED to be a much darker contemporary, exploring the consequences of impaired driving, online shaming, and cyberbullying—Paula also includes an Author’s Note at the end of the novel, detailing her journey in researching the aspects of this novel. I definitely think this is a book worth discussing and reading.

Thank you to HarperTeen & Paula for providing me with this book in exchange for an honest review.

Are you planning to pick up this book? Let me know your thoughts in the comments!

7 thoughts on “Review: This is How it Happened by Paula Stokes”