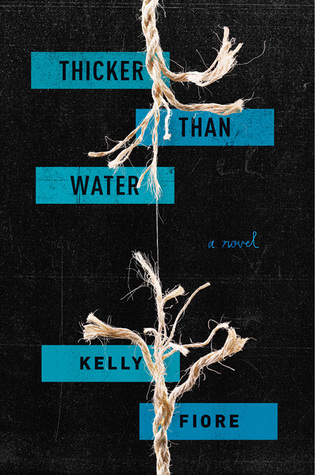 Cecelia Price killed her brother. At least, that’s what the police and the district attorney are saying. And although Cecelia is now locked up and forced into treatment, she knows the real story is much more complicated.

Cyrus wasn’t always the drug-addled monster he’d become. He was a successful athlete, but when an injury forced him off the soccer field and onto pain medication, his life became a blur of anger, addiction, and violence. All CeCe could do was stand by and watch, until she realized one effective way to take away her brother’s drugs while earning the money she needed for college: selling the pills.

Soon, CeCe becomes part drug dealer, part honor student. But even when all she wants is to make things right, she learns that sometimes the best intentions lead to the worst possible outcome.

Thicker than Water is an unforgettable dark, harrowing look into the disturbing truth of drug addiction and the desperate love of a sister watching her brother deteriorate before her eyes.

Thank you to Harper Collins for this book in exchange for my honest opinion. I was not compensated for this review.

THICKER THAN WATER was a heart-wrenching but beautiful story of a family coping with drug addiction and death.

I started off reading this book with no idea what to expect, but once I read the first page, I was hooked. CeCe is an intelligent high school girl who is shaken by her mother’s death, and when her brother, Cyrus, gets hooked on pain killers, it causes CeCe to make decisions that deeply change her life.

Written from personal experience (Fiore is somewhat open about this in her acknowledgements), Fiore’s pure talent of writing is shown throughout each page. I was captivated by every page, and this book nearly reduced me to tears.

What I loved about this book was the deeply emotional theme: dealing with death and addiction. CeCe goes through huge lengths in order to provide from herself and the people she cares about. Although CeCe does have several flaws in her thinking, it’s clear that she truly wants “old” Cyrus back.

Another interesting aspect was the format of the novel. This book was written in alternating chapters, changing from the present situation from which CeCe is telling the story to the past, leading up to Cyrus’s death.

What made me a little bit “iffy” about this book was how quickly the novel ended. It felt rushed and I did not feel as if I had enough closure to feel satisfied with the conclusion.

Overall, THICKER THAN WATER was an emotional and raw experience that truly captures the reality of drug addiction.

4 thoughts on “– ARC Review: Thicker Than Water by Kelly Fiore”