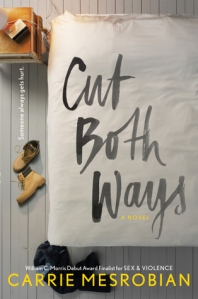 Will Caynes never has been good with girls. At seventeen, he’s still waiting for his first kiss. He’s certainly not expecting it to happen in a drunken make-out session with his best friend, Angus. But it does and now Will’s conflicted—he knows he likes girls, but he didn’t exactly hate kissing a guy.

Then Will meets Brandy, a cute and easy-to-talk-to sophomore. He’s totally into her too—which proves, for sure, that he’s not gay. So why does he keep hooking up with Angus on the sly?

Will knows he can’t keep seeing both of them, but besides his new job in a diner, being with Brandy and Angus are the best parts of his whole messed-up life. His divorced parents just complicate everything. His father, after many half-baked business ventures and endless house renovations, has started drinking again. And his mom is no help—unless loading him up with a bunch of stuff he doesn’t need plus sticking him with his twin half-sisters counts as parenting. He’s been bouncing between both of them for years, and neither one feels like home.

Deciding who to love, who to choose, where to live. Whichever way Will goes, someone will get hurt. Himself, probably the most.

Thank you to Edelweiss and Harper Collins for the book in exchange for an honest review.

Will is someone I could not put a label on, whether that is considered bad or not. His first kiss is with Angus (a character I really loved, by the way), and his first time is with a girl named Brandy. Will spends most of his time in this novel trying to figure everything out, from his sexuality and feelings to his parents’ divorce.

Despite the honesty of the novel, what I didn’t love was the plot. I felt as if there wasn’t really anything that was going on. Will tries to figure out his sexuality and then he helps builds a house. There was a portion near the end that it almost made me DNF, so I basically skimmed for twenty some pages. Fortunately, the end of the novel got incredibly exciting, which may or may not have made my overall image of the book better.

Overall, I didn’t think CUT BOTH WAYS was the best book I’ve ever read, but it certainly was not the worst.

Have you read this book? Leave a comment below with your thoughts!

2 thoughts on “– ARC Review: Cut Both Ways by Carrie Mesrobian”